George Robert Crow was born in 1924 in Ohio, USA, but grew up in the hills of West Virginia. On May 23, 2007, Robert Crow went to be with the Lord he knew, loved and served till the end. He left behind a lasting legacy for the church in India: Grace Ministries and the GM Study Bible.

Grace Ministries began with George Robert Crow and his colleague based in India; Jeevan Nair, a graduate of Regent College, Vancouver, Canada.  “Bob”, as he was fondly known, was a corporal in the US army stationed in France during the Second World War.  Formerly an atheist, Bob Crow attended the University of Chicago and graduated with an arts degree. He was eager to prove that Christianity was for the birds and began reading the book of Romans. However, the Lord had other plans and Bob came to accept Christ as his personal Saviour.

Soon after graduation, Bob became the Pastor of a church in West Virginia. He was greatly influenced by Hudson Taylor, George Muller, Amy Carmichael and their spiritual principle of living and serving Christ by faith.

In 1952,  Bob Crow came to India. He chose a remote, primitive, hot and dusty village in the south Indian state of Andhra Pradesh (commonly known as Andhra) to begin his missionary work. A village so undesirable that someone once commented that there were more poisonous snakes present than there were people. Within six months of his arrival, Bob began to preach in Telugu, the main language of Andhra. He also spent considerable time studying Hinduism and the Hindu culture.

Later, he moved to Hyderabad-Secunderabad, the twin city state capital of Andhra, where he helped establish two worship centres: a local church called the Good News Centre and the Secunderabad Bible Fellowship. Bob Crow got involved with the local IVCF and Youth for Christ ministries among students, often travelling all over India, teaching and preaching in Conventions, Camps, and Evangelistic Meetings. Among those he led to Christ are a couple of well-known international leaders. Once, when someone mentioned to Bob, “This gentleman claims you led him to Christ,” his response was, “I have been accused of worse things than that.”

The Need of the Hour

Bob Crow’s work among the Telugu people made him realise that the language of the existing Telugu Bible was unlike the everyday spoken language of the common people. He longed to do something of value to address this anomaly and was ecstatic, when, at the height of his preaching, teaching and writing career, he felt a strong calling to translate the Bible into contemporary Telugu, a language spoken by nearly 100 million people.

He promptly reduced his preaching ministry and with the advice and help of a few Indian friends proficient in the language, he spent the next several years translating the Bible into spoken Telugu. He was also acutely aware that there were almost no study helps in the Telugu language (or in the other languages of India).  No commentaries, dictionaries, or concordances.  So, after the Telugu Bible was published, he went on to prepare a Study Bible in Telugu.

The GM Study Bible is not copied from a study Bible produced for the West. On the other hand, it contains notes written especially for the Indian audience, where the background and ways of thinking are different from that of western nations.

For several years, Bob Crow and Jeevan Nair were engaged in writing notes on the entire Bible, choosing references and making a topical concordance; a work of nearly 1000 pages. These were translated into Telugu and published with the help of India Bible Literature as the first Telugu Study Bible in history.

Meanwhile, in 1983, Bob Crow founded Grace Ministries (GM) for the express purpose of producing Study Bibles in Indian languages.  Since then, more than 400,000 copies of the GM Telugu Study Bible have been sold and distributed.

The Lord Jesus Christ was the inspiration for Bob Crow, who left the shores of America to become a blessing on Indian soil.  His legacy lives on through Grace Ministries, a not-for-profit organization.

After more than 2000 years, today, we are closer to the second coming of our Lord Jesus Christ, than ever before.
The message and motivation of the Nazarene is as relevant now as it was then.
His was a small group, a small beginning, yet millions down the centuries and across the globe
have been inspired and empowered with hope, healing and salvation. 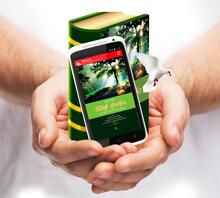 A lot has changed but not our needs, nor the human condition. God’s word is as relevant today as it has ever been. It cannot be made more relevant than He has already made it, but all too often, the relevance is unclear because of obscure language, lack of study tools and human error. The GM Study Bibles are easy-to-read translations, together with authentic study material in an affordable package for Indians. 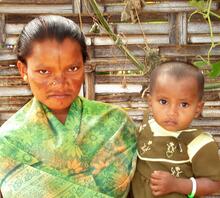 The tribal people of India are the original inhabitants of the land, thrust into marginalisation and obscurity; lacking even the most basic of facilities; victims of neglect and exploitation; suffering injustice and deprivation. Grace Ministries reaches out to the “Koya Tribals” with the good news of the kingdom of God while extending support and sustenance to several pastors, evangelists and their families, working in various remote areas across India. 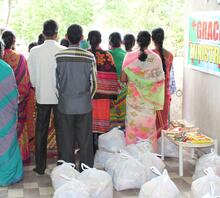 For more than ten years, Grace Ministries has been providing daily nutrition and hope to HIV infected and affected families. Currently, help is being given to 20 such families, 18 of which are women with children. Some people have died of AIDS and have been replaced by others who need similar help. Stigmatized and bereft of hope, these victims have found the love and acceptance of the Heavenly Father.